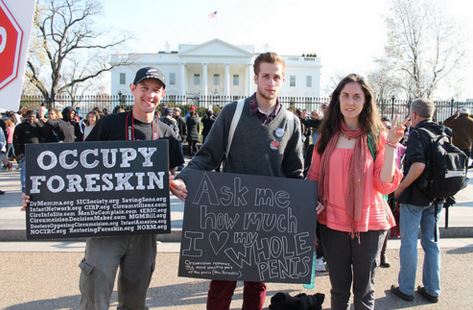 Though the vast majority of guys born in the U.S. are circumcised, there is a vocal contingent of men who strongly believe that those living without foreskins are missing out. More than mere fetishists who find uncut men more sexually appealing, many foreskin enthusiasts assert that circumcision can have detrimental impacts on the physical and psychological health.

Foregen, a non-profit organization operating out of Rome, Italy, is becoming one of the largest advocates for the future of restorative treatments designed to help men recover some of their lost sexual tissue. To be clear Foregen is not offering any particular procedures, therapies, or drugs that can instantaneously regenerate a man’s foreskin.

Rather, the company is working to shed light on the broader field of regenerative therapies, albeit with a specific focus on foreskin. At present Foregen, which also operates here in the U.S. has raised about $100,00 from private investors and has plans to crowdsource additional funding.

According to Foregen’s website “the demand for a cure for circumcision is overwhelming.”

“The body part that is in highest demand for regenerative purposes in the US is the kidney. About 100,000 people are on the waiting list for one. There are approximately 1,000 times as many men (100 million) who are in need of an intact penis in the US alone!”

Foregen also claims that by spearheading the menace of circumcision, development into the broader field of human regeneration with be spurred.

“The premise behind Foregen is that if we are regenerating entire body parts from more complex body parts, why not apply this to the only body part that hundreds of millions of boys are missing,” Eric Clopper, a Foregen rep explained to Motherboard.

Those in favor of foreskins agitating for circumcision solutions often point out valid point that the natural flesh fundamentally changes a penis’s structure just by virtue of covering the glans and being packed with thousands of nerve endings. But, as Arikia Millikan explains for Motherboard, quantitative studies into the actual experience of having a foreskin vs. not and have been dubious in the past:

“A 2015 paper by Jacobs and Arora claims that foreskin has basically no effec​t on sexuality, but it cites likely biased sources connected with Brian Morris, and, as Earp points out in a critique​ published in the American Journal of Bioethics, the research they cite relies mainly on a pair of clinical trials that were carried out—not on infants—but on adult men who were voluntarily circumcised.”

For a fun refresher on why Americans choose circumcision in the first place, check out College Humor's "The Real Reason You're Circumcised" AFTER THE JUMP…

What do you think? Is Foregen’s cause worthwhile one? Sound-off in the comments.