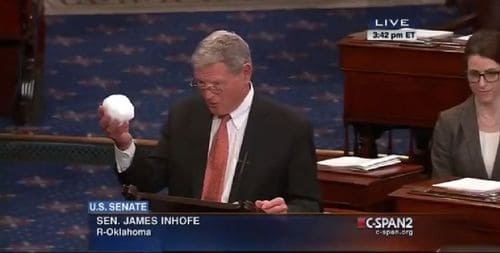 Oklahoma Sen. James Inhofe, who infamously bragged on the Senate floor in 2006 that "in the recorded history of our family, we've never had a divorce or any kind of a homosexual relationship," engaged in another bit of political grandstanding this week – this time in an asinine attempt to prove global warming is just a bunch of bologna.

"In case we have forgotten because we keep hearing that 2014 has been the warmest year on record," said Inhofe, who is the chairman of the Environment and Public Works Committee while holding the lumpy snowball in his hand. "I asked the chair, do you know what this is? It's a snowball just from outside here. So it's very, very cold out. Very unseasonable."

"Catch this," he said, as he tossed the snowball underhand to an unseen person — perhaps a page or an aide — just a couple of feet away.

He then resumed his speech with a smile on his face that indicated he was quite pleased with his demonstration.

Earlier this week, it was revealed Dr. Wei-Hock Soon, one of Inhofe's favorite climate denier scientists, failed to properly disclose the fact that he'd received over $1.2 million from fossil fuel corporations like ExxonMobil over the past decade.