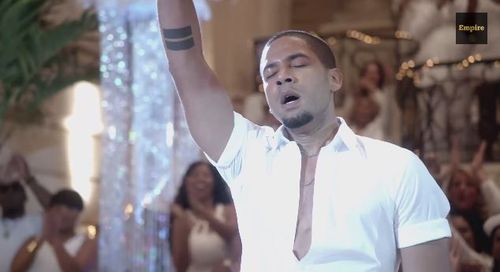 There are a number of reasons that you should be tuning in to Lee Daniels’s Empire including, but not limited to: Courtney Love actually acting (and killing it,) Naomi Campbell playing a cougar into mother-son roleplay, and Raven-Symoné playing a savvy gold-digger. The show is meant to revolve around the stories of Lucious Lyon’s (Terrence Howard) sons vying to inherit their father’s company. In reality, though, this season’s been all about Cookie Lyon (Taraji P. Henson) and Jamal (Jussie Smollett) – Lucious and Cookie’s gay son.

Empire has featured a fresh, yet complex take on relationships between homophobic parents and their gay children. Daniels has made clear his desire to use the show as a vehicle to address gay black men plagued by homophobia, and this week was no exception. In typical t form Jamal comes out to the world through song, eliciting a wide variety of reactions from the public and his family. If you’ve been keeping up with the season then the episode’s treating Jamal’s sexuality as a public revelation might seem a little off–his being gay is one of the show’s worst kept secrets. But hey, what’s a little lapse in continuity in exchange for all that camp?

Check out Jamal’s coming out performance here AFTER THE JUMP…