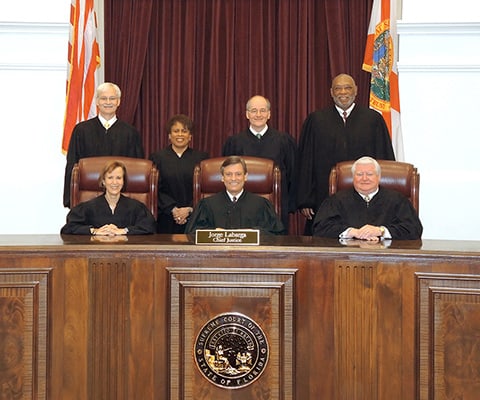 The Florida Supreme Court will decide the definition of sexual intercourse as it applies to state law and whether that definition includes homosexual sex acts.

As Reuters reports, the court's involvement in the matter stems from a case in which a Key West man, Gary Debaun, was charged in 2011 with lying to a man about his HIV status before engaging in sexual activity. Debaun was acquitted of those charges by a county circuit judge because state law defines sexual intercourse as taking place between a man and a woman. Florida law requires HIV positive individuals to inform their partners of their status before engaging in sexual intercourse. The state has argued that the law was meant to apply to both heterosexual and homosexual sex.

"The Florida Legislature and this court have always identified penile-vaginal union as 'sexual intercourse' and distinguished it from all other sexual contact," assistant public defender Brian Lee Ellison, representing Debaun, said in his brief to the high court.

"The plain meaning of the term is therefore clear and unambiguous," he added, stating that, according to Florida law sexual intercourse "does not refer to homosexual acts or oral sex."

Assistant Attorney General Joanne Diez wrote in her brief that "the lack of a definition of 'sexual intercourse' … did not render the statute ambiguous or unclear."

The court has dealt with sexual definitions before, in 1971 striking down an 1868 statute that criminalized "the abominable and detestable crime against nature with either mankind or with beast" in the case of two gay man who faced up to 20 years in jail.