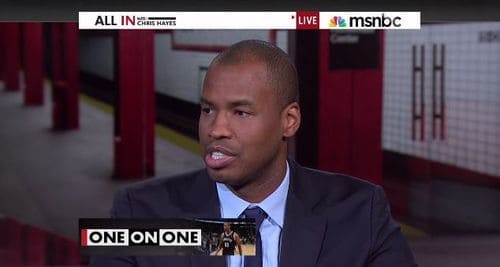 Jason Collins has been busy since becoming the NBA’s first openly gay player and subsequently retiring from the league. Since leaving the sport, Collins explained in an interview with The New York Daily News he’s spent his time mentoring other young, queer basketball players who have yet to come out of the closet.

“I’m in contact with other athletes, collegiate and professionally who are members of the LGBT community who maybe aren't ready to come out publicly but they have in their private lives,” Collins explained. “At this point it’s up to each individual person who has their life to live.”

I know there are more members of the LGBT community who haven’t yet stepped forward and (I’m) encouraging them that when they do that the world is ready to accept them and support them. As far as the NBA goes- the NBA is an incredible league. Basketball is a sport of inclusion and diversity and I hope they’re able to know how good it will be to be able to live their lives that they want off the court and also be able to have their job on the court.”

Watch Jason Collins speak with Chris Hayes about his newfound role as a mentor to young, closeted athletes AFTER THE JUMP…