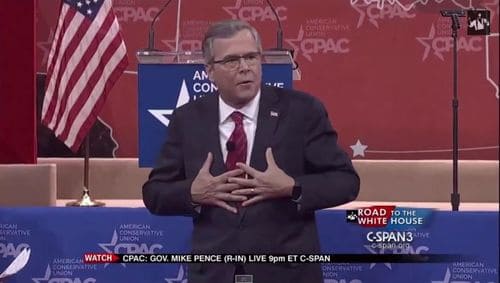 Whatever questions there may be surrounding Jeb Bush's private views on LGBT issues, it doesn't look like he'll be changing them publicly anytime soon, the Washington Blade reports:

Onstage at the second day of the 2015 Conservative Political Action Conference, Bush was asked if his views had changed on same-sex marriage by conservative commentator Sean Hannity. The former Florida governor was succinct in his reply: “No. I believe in traditional marriage.”

The potential candidate — who once backed the efforts of his brother, former President George W. Bush, to pass a U.S. constitutional amendment banning same-sex marriage throughout the country — made the comments before a conservative audience as he tried to play down his support for immigration reform and federal education standards under Common Core.

Watch Bush's full speech and Q&A, AFTER THE JUMP…