TONIGHT: Join us tonight for liveblogging coverage of the GOP Convention at THIS LINK. Susie Bright will be joining us from Mexico along with Towleroad editors and special guests for commentary you can follow along with prime time coverage.

GOP CONVENTION. Police union asks for suspension of “open carry” in wake of recent violence: “We are sending a letter to Gov. Kasich requesting assistance from him. He could very easily do some kind of executive order or something — I don’t care if it’s constitutional or not at this point,” Stephen Loomis, president of Cleveland Police Patrolmen’s Association, told CNN. “They can fight about it after the RNC or they can lift it after the RNC, but I want him to absolutely outlaw open-carry in Cuyahoga County until this RNC is over.”

GOP CONVENTION. Ivanka Trump and Jared Kushner’s rabbi pulls out. “Rabbi Haskel Lookstein, who heads the congregation that Mr. Trump’s daughter Ivanka and her husband, Jared Kushner, attend, told friends and congregants in an email on Friday that he had decided to back out because his appearance had become too politically charged. Faced with a backlash after the Trump campaign released his name on a list of speakers — without specifying that he would deliver an invocation and not a speech — the rabbi said he had little choice.” 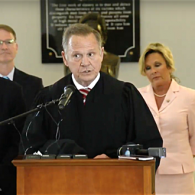 ALABAMA. Alabama Judicial Inquiry Commission wants Roy Moore out now. “This court (COJ) can conclude this matter now, deny the Chief Justice’s motion for summary judgment, enter judgment as a matter of law in favor of the commission (JIC), remove the Chief Justice from judicial office, and reaffirm Alabama’s fidelity to the rule of law,” the JIC motion states. 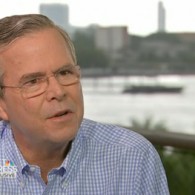 JEB BUSH. Trump does not represent our future or the GOP: “Eight years of the divisive tactics of President Obama and his allies have undermined Americans’ faith in politics and government to accomplish anything constructive. The president has wielded his power — while often exceeding his authority — to punish his opponents, legislate from the White House and turn agency rulemaking into a weapon for liberal dogma. In turn, a few in the Republican Party responded by trying to out-polarize the president, making us seem anti-immigrant, anti-women, anti-science, anti-gay, anti-worker and anti-common-sense.”

ERIC FANNING. Army Secretary was grand marshal at San Diego Pride Parade. “Today, when our critics say that the military is not a place for social experimentation, they may be right. But equality and inclusivity are not experiments. They are American values,” he said during the Spirit of Stonewall rally, which honored gay New Yorkers who fought police harassment in 1969.

MUSTARD ON EGGS. 25 things you don’t know about Rachel Maddow.

POKEMON GO. The guide you need.

ORLANDO. Omar Mateen’s autopsy probed for ‘roid-rage’: “A post mortem conducted by medical examiners in Orange County, Florida, revealed changes in Mateen’s body consistent with heavy steroid use. However more toxicology tests will be carried out to confirm whether “roid rage” played any role in the shooting, examiners told the newspaper.”

TAYLOR SWIFT. Kanye West and Taylor Swift feud goes nuclear after Kim Kardashian posts videos of Swift on the phone with Kanye West….”tonight Kim Kardashian released videos on Snapchatof the singer giving Kanye West permission to use her in his song “Famous” — a permission Tay had previously denied. In the snaps Kanye tells Swift over the phone about the lyrics, “I feel like me and Taylor might still have sex” and we hear her positive response (“it’s like a compliment”), but that’s not everything he said in the song, nor, as Taylor tells it, the whole story.”

Swift has something to say:

REUSABLE ROCKETS. SpaceX successfully lands Falcon 9 reusable rocket, sends Dragon spacecraft to the ISS. “The unmanned Falcon rocket was successfully deployed from a NASA base in Cape Canaveral, Florida, carrying over 2,000 kg (4,400 pounds) of supplies as well as the new docking system. The Dragon capsule was released from the rocket, which SpaceX then managed to land back on Earth — the second time it has done so.”

WILL YOUNG. British singer to release Summer Covers EP: “The singer has recorded a collection of his favourite tracks with his band at Dean Street Studios to form his new Summer Covers EP. ‘I really wanted to record some of my many covers I have done over the years, especially following a jazz residency at the 606 Club a few years ago,’ Will explained.”