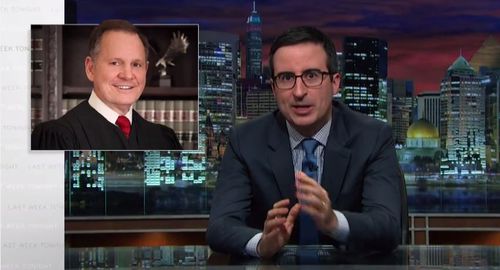 Fun fact: 85% of state judges in America are elected. Unsurprisingly, this didn't sit well with John Oliver, who devoted his top story of last night's Last Week Tonight to highlighting the numerous conflicts of interest that arise when judges must pander to the electorate and accept campaign money in order to keep their jobs.

Exhibit A on Oliver's list of problematic judges is Alabama Supreme Court Chief Justice Roy Moore, who Oliver says is living up to his state slogan "Alabama: Boldly refusing to accept diversity and the inevitable since 1819" with his continued efforts to try and stop gay marriage.

Previous Post: « John Travolta Explains The ‘Adele Dazeem’ Incident: VIDEO
Next Post: Celebrate YouTube’s 10th Birthday with This Supercut of 101 of the Most Viral Videos of the Decade: WATCH »