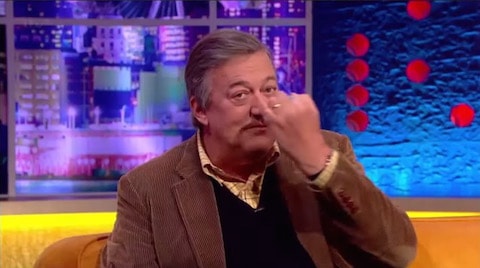 Or so says Stephen Fry.

Appearing as a guest on the Jonathan Ross Show to speak about his recent wedding, Fry revealed that the Queen, though officially politically neutral, is delighted with the turn of events in same-sex equality:

It was only last summer that Her Majesty The Queen gave the Royal Assent. When the Queen signed the Royal Assent for the Equal Marriages Act, allowing gay people to marry for the first time, she put it down and said 'Well, who’d have thought 62 years ago when I came to the throne, I’d be signing something like this? Isn’t it wonderful?'

The whole episode is embedded here, but the bit about the Queen can be found starting at the 9:32 mark AFTER THE JUMP…

Previous Post: « According To Pat Robertson, Christians Are The Victims Of DADT Repeal: VIDEO
Next Post: LISTEN: Madonna’s 3 New ‘Rebel Heart’ Tracks and Her Post-Grammy Phone Call with Ryan Seacrest »