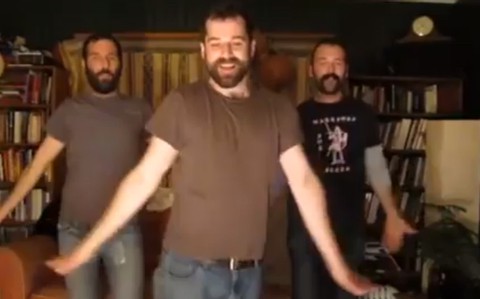 It was back in 2009 when three bears took on Dianna Agron's version of "I Say A Little Prayer For You" from the first season of Glee, proving you don't need goldilocks to get it just right.

The video has recently resurfaced and received the approval of notable out bear Brian Sims who shared the video on his Facebook:

"Usually, when someone comments to me about how it feels like I'm everywhere, I say something about how there's 4 of me and we're all busy! Today, I learned what the other three are doing on a federal holiday while I'm at the office getting a few things done… ‪#‎slackermes‬."

The bears performing are Jason Whipple up front, Josh Cheon (left) who has gone on to be a part of Honey Sound System, "San Francisco's coveted queer dj collective and production group," and Mark Louque (right) from f-gbash, a DJ and institution in his own right in Provincetown and New Orleans.

Throw it back early this week, AFTER THE JUMP…

Previous Post: « Mars One Project Selects 100 Finalists For One-Way Trip To The Red Planet: VIDEO
Next Post: Darren Criss Will Return To Broadway In ‘Hedwig And The Angry Inch’ »