Texas officials should comply with the U.S. Supreme Court's upcoming ruling on same-sex marriage "depending on what it is they say," according to anti-gay attorney Jonathan Saenz. 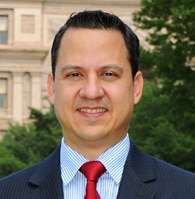 Saenz is the president of the anti-LGBT hate group Texas Values, whose ex-wife famously left him for a woman. He made the statement during a committee hearing Wednesday night on a bill that would bar state officials from issuing marriage licenses to same-sex couples, or recognizing their unions, regardless of whether federal courts determine the ban is unconstitutional.

Democratic Rep. Sylvester Turner pressed Saenz, who testified in favor of the bill, about whether he was advocating that state officials ignore a ruling from the U.S. Supreme Court.

"You do believe that if the United States Supreme Court rules that something is the law of the land, that those of us within the state of Texas, should follow the dictates and operate within the parameters of whatever the law is established by the Supreme Court," Turner asked. 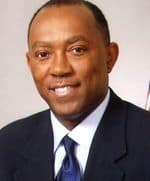 Turner, who's black, explained to Saenz why he think it's important for Texas to obey the Supreme Court.

"I'm just very sensitive because I know based upon my own history and the history of those who look like me, that there have been many state laws that have worked against people's interests, and it was when the Supreme Court stepped in that those laws … conflicted with the supreme law of the land," Turner said. "So I think I would be very, very reticent to take a position that when the Supreme Court makes a ruling, whether we like it or not, that we then try to find ways to get around those laws, because history tells us that is not a good precedent."

The Texas Observer reports that Saenz was among dozens who testified for and against the bill during the nearly two-hour hearing, which you can watch in its entirety here beginning at 3:12:00 mark.

The chairman of the committee eventually left the bill pending, meaning he may or may not call it back up for a vote later in the legislative session.

Watch the clip of Saenz's testimony, AFTER THE JUMP …

Previous Post: « Irish Government Clarifies There Will Be No ‘Right to Discriminate’ Following Marriage Referendum Vote
Next Post: Sen. Harry Reid Will Not Seek Re-Election in 2016: VIDEO »