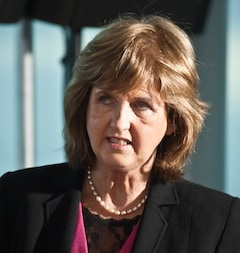 The Irish government has indicated that there will be no religious opt-out clause for businesses that do not want to provide goods and services for same-sex weddings, reports the Independent.

A referendum on same-sex marriage will take place on May 22nd.

Labour leader Joan Burton (right) was responding to a call by the Archbishop of Dublin, Diarmuid Martin, for a religious “right to discriminate” for business people who had "problems of conscience" about gay marriage.

Although religious ministers will be allowed to refuse to perform same-sex marriage ceremonies, Burton was emphatic that this could not be extended to business people who refused to sell goods or services to gay couples.

Earlier this month, a priest in the west of Ireland broke ranks with the Catholic church's anti-gay agenda by announcing that he will vote in favor of same-sex marriage.

In December of last year, the Catholic Church in Ireland released a manifesto explaining exactly why it is opposed to marriage equality.

Watch Burton explain why she supports marriage equality, AFTER THE JUMP…

Previous Post: « Towleroad Guide to the Tube #1713
Next Post: Anti-Gay Hate Group Attorney: Texas Should Obey SCOTUS On Marriage, ‘Depending On What It Is They Say’ »