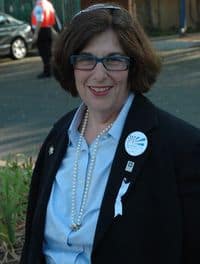 Eger, 55, who grew up in Memphis, Tenn., said she sees this moment not as a triumph for her alone, but for all those who have supported her and LGBT causes along the way.

"It's a wonderful tribute to all those LGBT colleagues and allies who worked so hard to channel hearts and minds and to work for equality and to cast the widest open tent for Judaism," she said.

In 2007, the Reconstructionist Rabbinical Association chose Rabbi Toba Spitzer, a lesbian, as its national president. But Reform Jews, with 2,000 rabbis and 862 American congregations, make up the largest movement in American Judaism and have a broader role in the Jewish world.