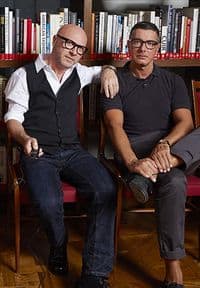 Domenico Dolce and Stefano Gabbana, the two men and former couple behind the Italian luxury fashion house Dolce & Gabbana, are once again letting the world know their thoughts on why same-sex couples shouldn't raise children.

Back in a 2006 interview with an Italian newspaper, Dolce expressed similar views saying:

LGBT news outlet LGBT news Italia has responded by calling for a boycott of the D&G brand in the vein of last year's boycott of pasta maker Barilla, who made international headlines when its chairman told an Italian radio show that the company would never make an ad with gay people and if they didn't like it they could find another brand of pasta.