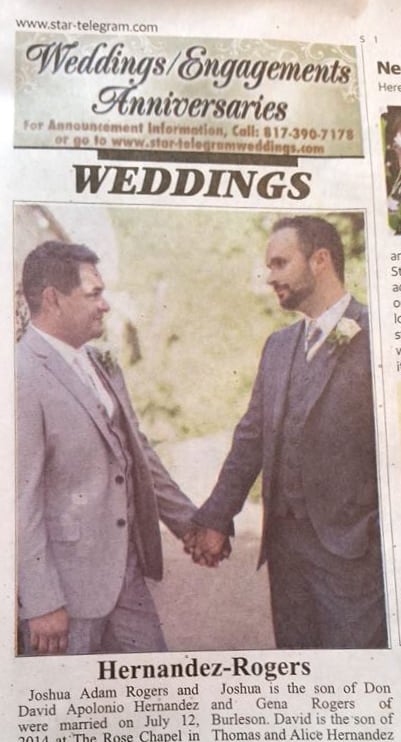 Marriage equality hasn't arrived in Texas, but in one possible sign that it's on its way, the daily newspaper in the state's most conservative big city has begun publishing same-sex wedding announcements.

The Star-Telegram of Fort Worth today published its first-ever same-sex wedding announcement, according to David Mack-Henderson, president of the LGBT group Fairness Fort Worth:

CONGRATS to DAVID HERNANDEZ & JOSHUA ROGERS on their wedding announcement in the FWST! Theirs becomes the first published in our local paper and serves as a testament that we are an integral part of this community. Who's next?! A generous anonymous donor has offered to pay for a handful of our marriage, engagement and anniversary announcement ($75 level) through March, based on need. If interested, please private message David Mack Henderson confidentially.

Last week, Mack-Henderson announced that the newspaper had finally agreed to begin publishing the announcements:

Over the last several weeks FFW has held discussions with FWST senior management encouraging the paper to present a more realistic picture of our community throughout their coverage area. This has resulted in increased coverage of timely legislative and court actions, the announcement by our Tarrant County Clerk's office regarding issuing marriage licenses when courts clear the way and a superb article featuring two local same-sex families with children who represent the essence of what it means to be part of the integral fabric of our community. …

On Friday, March 7, Star-Telegram Publisher Gary Wortel confirmed with FFW President David Mack Henderson that the paper will begin carrying announcements from our community members that more accurately reflect our lives. Please note that the criteria for Marriage Announcements specifically is based upon legal place of ceremony.

These are paid announcements and are now available to ALL citizens, as they should be under the City of Fort Worth's non-discrimination ordinance regarding public accommodation. …

We encourage our community to actively promote their authentic, loving relationships, giving testimony to our lives truly lived and fostering an embracing environment for our youth in search of proactive role models and seeking their rightful place as they grow and develop into healthy adulthood.