A geriatric twist on the tale of Sherlock Holmes starring Ian McKellen is coming to theaters this upcoming summer, TIME reports: 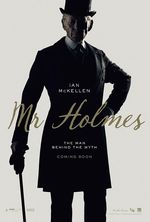 Mr. Holmes, based on the novel A Slight Trick of the Mind by Mitch Cullin, follows a retired Sherlock as he tries overcome his failing memory to crack an unsolved mystery.

The trailer opens in the British countryside just after World War II and suggests the older Sherlock will rely not on Dr. Watson, but a young boy named Roger, played by Milo Parker, as his trusty sidekick.

Previous Post: « Right-wing Columnist Cal Thomas Preparing His Family For ‘End Times’ Following Gay Marriage Ruling: LISTEN
Next Post: What It’s Like To Come Out To Your Mother As A Gay, Poly Purveyor of Adult Entertainment: VIDEO »