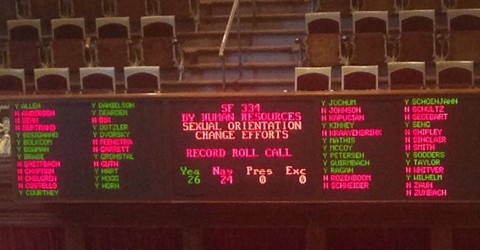 In a straight (no pun intended) party-line vote, the Iowa Senate on Tuesday approved a proposal to ban gay conversion therapy for minors.

Twenty six Democrats voted in favor of the measure, while 24 Republicans voted against it.

The bill would prohibit licensed mental health professionals from attempting to change the sexual orientation of anyone under 18. Only California, New Jersey and Washington, D.C., have passed similar laws.

"I am heterosexual, and I would hate to go to a therapist who would try to convert me to be gay," said Bolkcom, adding that the legislation would send the message to Iowans that "being gay is OK." …

Sen. Julian Garrett, R-Indianola, spoke against the bill, saying the most important issue is one of choice.

"There may be parents and minors who desire this kind of counseling, and should we deprive them of that choice, particularly if they want to go to a licensed professional?" Garrett said. "I believe we ought to leave this choice up to the parent and the minors involved. If they do want it, it should be their right."

Openly gay Iowa Sen. Matt McCoy (right) called conversion therapy "the worst kind of child abuse" and urged his colleagues to "stand on the right side of history." Unfortunately, the bill isn't likely to pass the Republican-controlled House, due to opposition from Christian conservatives.

It's interesting that these so-called Christians couch arguments against conversion therapy bans in terms of freedom, yet they do not support the freedom to marry.

Also, it's notable that unlike other proposed conversion therapy bans around the country, the Iowa bill — which you can read here — doesn't include gender identity.

This is a curious exclusion, especially in the wake of the highly publicized suicide of trans teen Leelah Alcorn.

Most state and national LGBT organizations have long had a policy of not supporting legislation that isn't fully trans-inclusive. So it's unclear to us why this standard isn't being applied to conversion therapy bans.

CORRECTION: Gender identity and expression are included in the Iowa bill under the definition of "sexual orientation change efforts."