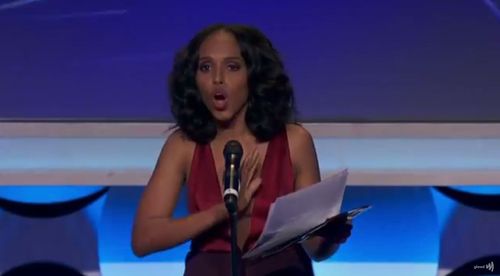 Scandal star Kerry Washington took home the Vanguard Award at last night's GLAAD Media Awards and gave a fiery speech in support of LGBT equality and visibility that would have had Olivia Pope herself raising a glass of red wine in support.

Of particular note was Washington's point throughout the speech that marginalized communities should be working together as allies rather than competing against one another for a seat at the table:

So when black people today tell me that they don't 'believe' in gay marriage (pause), the first thing that I say is please don't let anybody try to get you to vote against your own best interests by feeding you messages of hate. And then I say, you know people used to say stuff like that about you and your love. And if we let the government start to legislate love in our lifetime, who do you think is next?

We can't say that we believe in each others' fundamental humanity and then turn a blind eye to the reality of each others existence and the truth of each others hearts. We must be allies. And we must be allies in this business because to be represented is to be humanized. And as long as anyone, anywhere is being made to feel less human, our very definition of humanity is at stake and we are all vulnerable.

Watch the full speech, AFTER THE JUMP…

Previous Post: « Anderson Cooper Grills Andy Cohen On If He’s Ever Had Sex In the ‘Watch What Happens Live!’ Clubhouse: VIDEO
Next Post: Ted Cruz to Launch Presidential Bid Tomorrow at Liberty University »