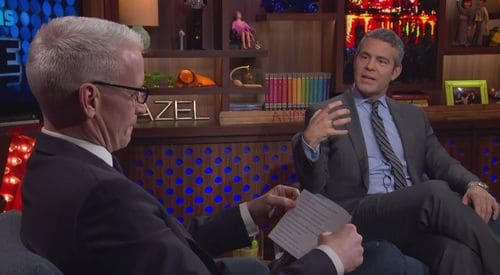 During his guest appearance on Watch What Happens Live! this past week, Anderson Cooper switched things up and decided to grill host Andy Cohen on a series of questions for a special one-on-one interview before the two headed off to Boston over the weekend for their "unscripted, uncensored and unforgettable night of conversation."

Which star's entourage has annoyed Cohen the most?
Does Cohen think AC's giggles too much?
Has Cohen ever hooked up with someone in his office or in the WWHL Clubhouse?
Would Cohen rather have sex with Cher or Madonna?
Hillary Clinton or Michelle Obama?

Find out Cohen's answers, AFTER THE JUMP…

Previous Post: « Rep. Randy Forbes and Sen. James Lankford: Chipotle Can Choose Its Meat, So We Can Discriminate Against Gays
Next Post: Kerry Washington Slays the House Down With Powerful GLAAD Acceptance Speech: VIDEO »