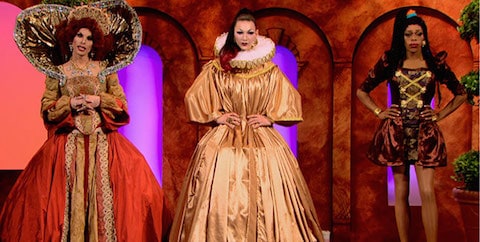 Whew. After last week's weak leaf-blower mini-challenge and a bizarre flight attendant performance, this week really put the queens to the test. In pushing our Top 12, the gap between the older, more experienced queens and the up and comers began to widen, but not necessarily in the way you would expect it to.

See whose performance was as fresh as a Midsummer's Eve Dream and who was more of a Othell-oh No She Bettah Don't, AFTER THE JUMP … 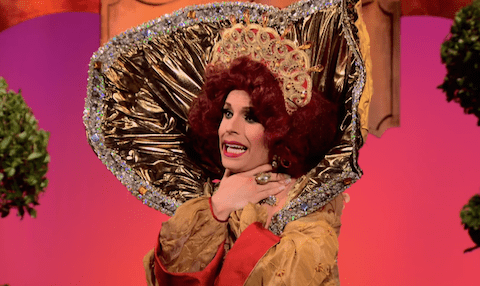 Tonight’s tour de force first asked the ladies to get decked out in their finest old lady makeup and hausfrau frocks then shake their tailfeathers in a good ol’ fashioned Soul Train dance line. Then the queens split into two teams to tackle a campy Shakespearean satire. Max’s team (Fame, Ginger, Jaidynn, Kasha and Trixie) put in a solid performance. However, Kennedy’s team (Jasmine, Violet, Kandy, Pearl and Katya) fell apart in spectacular fashion. Even the ever-encouraging Mama Ru told them it was the worst he’d seen in seven seasons. Ouch.

And that wasn’t even at judging yet!

Let’s see how the remaining contestants stack up with our rankings.

1. Another week, another handful of reasons to keep on loving Ginger Minj. I think she served my favorite old lady drag of the mini-challenge, mixing just the right of amount of Orlando glamour and Tallahassee facial grooming. I can't tell if I was charmed by her story of the lady with the bucket list, or if it felt a little overwrought for my taste. I'm all for respecting the craft and artistry here, but let's not confuse this with missionary work. 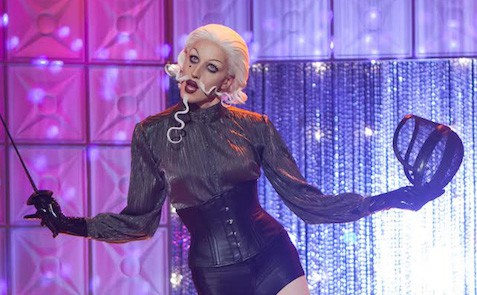 2. Surging up the rankings this week, Max. She’s really committed to this character, and this episode saw it applied through three different filters. Whether she was kicking up her heels as an old lady, sissying that iambic pentameter as a silver-haired Juliet or rocking a surrealist ‘stache, Max proved she could balance her character without being a one-trick pony. Her friendliness as team leader did feel a little overeager (to the point of seeming a little insincere), but we’ll give her the benefit of the doubt.

3. I was fascinated with how Katya contorted/padded her body during the mini-challenge, but I was even more impressed with how she managed to come out of her team’s atrocious performance relatively unscathed. (Bonus points for that all-over pug print T-shirt.) I did find it strange for Michelle Visage to say Katya has been consistently delivering after she was in the bottom two just last week.

4. Here’s a lesson for Jaidynn Diore Fierce. If you want to get the hero edit, you need to have the breakdown in rehearsals about how this is your greatest fear/biggest insecurity, then you kill it in the challenge so you get all the credit for rising above. (See Ginger’s win during last week’s dance challenge.) Maybe it’s because Ru didn’t make a visit during rehearsal, but I thought her breakdown during their performance would merit a dressing down on the runway, not the kudos she received.

5. Mrs. Kasha Davis gave a serviceable Shakespeare reading, but her costume was distracting. I couldn’t help but wonder “What is Shannel doing here?”

6. Trixie neither shined nor stumbled through tonight’s challenges. Middle of the pack won’t keep her here forever, but it was refreshing to see her give us something different on the runway. (Though I was WAITING for Michelle Visage to read her for not cinching that waist more.)

7. I’m just not sure what to make of Miss Fame. She’s still coming off more likable than Violet (faint praise, indeed), but, admittedly, her fashions have been less impressive than Ms. Chachki and she still can't act worth a damn. If she can’t break through next week, I’m afraid she’ll stand little chance of making it all the way.

8. Similarly, it appears the shine is off the Pearl. I loved her Broadway Baby old lady drag, and her bearded lady was the most interesting of the bunch. Sadly, I think Pearl is Pearl, and that sleepy, spaced out cadence is just who she is. If the judges aren’t warmed to it yet, I don’t think she’s going to change.

9. I don’t get why Ru chose Kennedy as the challenge winner. Her old lady chic wasn’t particularly notable. Then, while I agree with her choice to swap Violet’s and Jasmine’s roles, you’d think she’d have enough sense to try and wrangle her crew into shape. Her runway look was too ugly even for Scary Spice. And that beard? It looked like something she fished out of the drain and stuck on her face.

10. Kandy Ho. Yawn. I guess we should be glad she stopped contouring her face wrong?

11. It’s a shame that Violet was such an unconvincing bitch during the performance, because she’s doing a helluva job off stage. Producers may keep her around for the sake of having a villain, but she can only rest on fashion for so long.

12. Jasmine Masters must feel a little silly for all the smack talk she was doing about how the other girls aren’t performers. Sorry, gurl, but you’re not much of a performer yourself. And then all the hype over the gown? Maybe TV didn’t do it justice, but it certainly wasn’t the best thing we’ve ever seen on the runway. Not even in the top five.