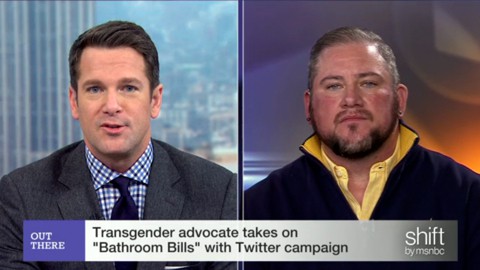 Michael Hughes had been suicidal for years — and even attempted to take his life once — when he accidentally stumbled upon a book that would change his life forever.

The book was "Body Alchemy," by photographer Loren Cameron, a compilation of images of trans men before and after their transitions. 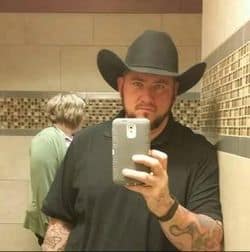 "It was the first time I realized that I could do something about it, and there was a path to take to become the person I knew myself to be," Hughes said. "So within a couple of weeks of that I packed up and moved from Texas to Boston, Massachusetts, and changed my name a week later, and started this crazy journey.

Hughes, of course, is the 45-year-old Minnesota activist who brought the #WeJustNeedToPee campaign to the US, following the lead of Canada's Brae Carnes. The campaign continues to garner significant attention, and this week Hughes appeared on MSNBC to discuss it with Thomas Roberts.

Hughes also spoke to The Advocate, explaining that for him personally, the campaign marked a major turning point:

"It was a bit of a tough decision, I knew I was forever outing myself," but "I knew I could get at some of these conservatives by showing them a tall bearded man in a women's bathroom," Hughes says, taking a break from preparing himself for a Wednesday interview on MSNBC about the selfie campaign. Hughes notes that before the unexpected publicity his photos have garnered, he primarily lived stealth — a term used in the trans community when a trans person is not open about their trans status.

Hughes said despite the campaign's popularity, he's gotten some negative feedback from within the LGBT community. But Hughes, a father of four, said he wishes more trans people would follow his lead and become more visible:

"Our youngest had to come out to her friends [about having a trans parent] when this broke," he says. "She's so brave and she was so proud to do it. She brought me cupcakes yesterday because she wanted to celebrate with me!

"It's sad that [legislators] imagine us to be these people that are so removed from normal," Hughes laments. "Yet we're as normal as the family next door."

Watch Hughes' interview with Roberts and check out some of the latest photos from the #WeJustNeedToPee campaign, AFTER THE JUMP …

According to a few States, this is the restroom I am supposed to use. #wejustneedtopee pic.twitter.com/AOh6mbnWro

Coming soon to a red state near you. #wejustneedtopee pic.twitter.com/CZRWANIfIn

Previous Post: « ‘Hot Dudes With Dogs’ Is Your New Instagram Obsession: PHOTOS
Next Post: Jim Parsons on His Hollywood Walk of Fame Star and Coming Face to Face With His Wax Statue: VIDEO »