Colorado Rep. Gordon Klingenschmitt says that 20 percent of the U.S. population will be gay next century because of gay “recruitment.” 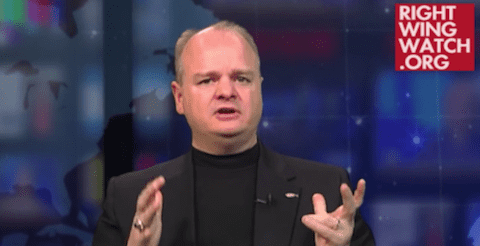 Despite displaying a modicum of decency earlier this week by apologizing for saying that a brutal attack on a pregnant woman in Colorado was god’s retribution for legal abortion, demon-obsessed Colorado Rep. Gordon Klingenschmitt is back on form, claiming that 20 percent of the U.S. population will be gay next century because of gay “recruitment.”

To be clear – Klingenschmitt thinks 20 percent of the population being gay would be a bad thing.

To back up his argument, with great insight Klingenschmitt referred to recent poll which found that places like San Francisco have a larger openly gay population than cities like Birmingham, Alabama, reports Right Wing Watch.

Arguing that the number of gay people in the U.S. has increased from one to three percent since the 2010 census, he warned that the gay population is growing through the recruitment of children, especially in areas "where they don't believe the Bible.”

"This proves to me that the Bible works. That when people believe the Bible, they promote holiness and they invite the Holy Spirit to rule their hearts, they don't have all these homosexual addiction problems that they have in places where they don't believe the Bible and they reject the Bible and they teach the children in California schools that homosexuality is a good thing and they celebrate Harvey Milk Day and they have all kinds of policies to promote that in the classroom. Well, no wonder their population is growing! They're recruiting people into the movement on the left coast.”

Klingenschmitt also offered as proof of the recruitment of children the argument that children raised in same-sex households are more likely to be gay. This, he said, shows that "in a hundred years, if we continue to allow this recruiting effort across America, all of the children in all of the public schools, if we don't stop this, will be re-educated that this is a good thing. And I predict in a hundred years twenty percent of Americans could become homosexual.”

Previous Post: « Anti-LGBT Houston Activist Wants To Enshrine Transgender Bathroom Ban In City Charter: VIDEO
Next Post: Will Young Is Ready to Take You on a ‘Love Revolution’ – VIDEO »