In a symbolic move, two members of the Little Rock Nine — Carlotta Walls Lanier and Ernie Green have voiced their opposition to Arkansas’ H.B. 1228, the new Indiana-style  bill that will open the door for discrimination against minorities of all kinds in the state of Arkansas.

On Tuesday, the Arkansas state assembly passed H.B. 1228. Like Indiana's law, the bill would allow for allow discrimination against LGBT people, people of color, religious minorities, other minority groups, and women in the name of "religious liberty."

Despite voicing doubts about such a bill in the past, Arkansas' Republican governor Asa Hutchinson has said he will sign the bill, despite opposition from Walmart, Apple, and the Arkansas Municipal League, and others. 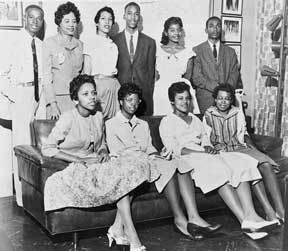 Said Green and Walls in a statement:

'Injustice anywhere is a threat to justice everywhere,' Dr. Martin Luther King, Jr. told us, and those words are as true today as they were half a century ago. In our home state of Arkansas, legislators are attempting to enshrine their own hatred into law…Once again, opponents of equality are giving credence to those who would refuse to serve their own neighbors under the guise of 'religious liberty,' telling us that our freedom of religion, cemented into law by the Constitution and by state law, is under attack. But we stand with our lesbian, gay, bisexual and transgender brothers and sisters, as well as religious minorities and others who could fall victim to discrimination under HB 1228, and we stand against this dangerous and derogatory legislation in its current form. This bill must be amended to protect civil rights or abandoned entirely.