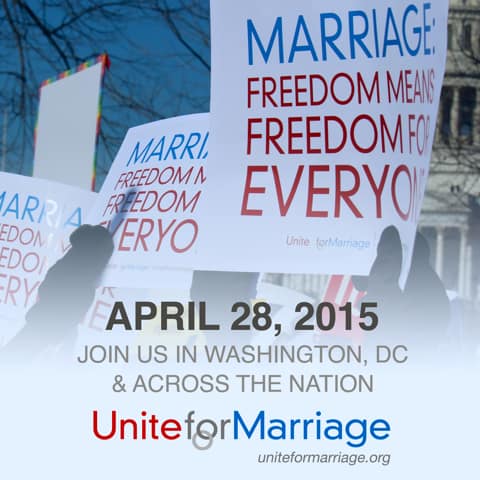 Marriage equality rallies are planned in more than 40 cities over the next few days to mark Tuesday's oral arguments at the U.S. Supreme Court.

From Unite For Marriage:

Like in 2013, a coalition of organizations and dedicated local organizers will be working together leading up to the oral arguments and Decision Day to make clear to the Supreme Court that the American public supports marriage equality, and that now is the time to rule once and for all that all couples — gay, lesbian, bisexual, transgender, queer and straight — are entitled to the same rights and protections of marriage.

Marriage equality supporters will rally outside the Supreme Court beginning at 9:30 a.m. Tuesday. Unite For Marriage is also staging a national weekend of prayer that will culminate in a service at National City Christian Church in Washington on Sunday evening. 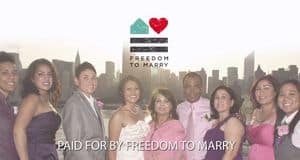 Dozens of other rallies are planned from Alaska to Florida on Sunday and Monday, including three in Alabama and four in both Mississippi and Tennessee. To find out whether there's a rally planned in your city, visit Unite For Marriage.

Meanwhile, Freedom To Marry has released a national TV ad scheduled to air Sunday on three national political shows and 60 Minutes, in addition to cable programs throughout the week:

“With this latest ad, Freedom to Marry is summing up our closing argument, in hopes of closing our doors after getting the national win,” said Evan Wolfson, president of Freedom to Marry. “After 30-plus years of doing marriage work, I am gratified that we're in such a strong place as we head into court on Tuesday. The American people have resoundingly and unequivocally embraced the side of love and fairness. We hope the Supreme Court does the right thing and agrees with more than 60 federal and state courts that have held marriage discrimination unconstitutional. America is ready for the freedom to marry. It's time.”

Watch the ad, AFTER THE JUMP …