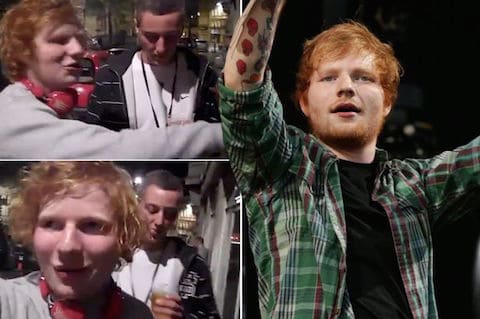 Well this is embarrassing. In 2011 Ed Sheeran got into a rap battle with rap artist Devlin outside a performance venue that was caught on tape, and some of Sheeran's language is…unfortunate. In the five minute video, Sheeran slings out lines like:

Yo, I freestyle to the faggoty man.
I go on the bus and I sleep for a day, then I come back and they’re like, Ed, you look like this gay.
These guys are safe they’re not gay mans.

The video on YouTube of the rap battle has been pulled, citing a copyright claim by Sheeran's label, Warner Music Group. Sheeran's spokesperson, meanwhile, has claimed,

Ed was sending up rappers who make homophobic remarks. He is clearly not ­homophobic.

While the veracity of that first statement is dubious, the second rings much more true. In 2013 Sheeran told off anti-gay protesters outside of Taylor Swift's concert in Kansas, tweeting,

To the people ­picketing outside the arena. Keep your homophobic views to yourself, it’s 2013.

Plus, last September he performed in Vegas with Macklemore with a new rendition of the very pro-gay song "Same Love".

The story here seems to be one of a man unaware of how damaging his words can be, not unlike the recent dust-up with Trevor Noah. Gay charity Stonewall released a statement echoing this sentiment, saying,

Homophobic language is a real issue in Britain, and is endemic in our schools.
It’s important to think about the words you choose to use, as what some people see as ‘banter’ can have a ­negative and lasting effect.

Sheeran should absolutely be held accountable for his words, of course, but before the Internet Outrage Machine gets too revved up, it should recognize that this is less an instance of truly homophobic sentiment and more one of a careless man who managed to not so much stick his foot in his mouth as swallow it up to the knee.