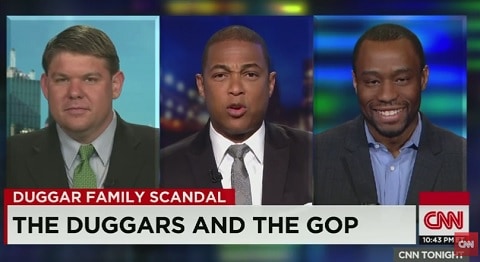 “The reality is, you have a family that cared more about protecting the brand of this family and being a total fraud than it did about the welfare of children who were abused by one of their own and covering it up. Anyone who stands with them at this point would be irresponsible. It sends the wrong message.”

Janet and I want to affirm our support for the Duggar family. Josh’s actions when he was an underage teen are as he…

Fellow contributor Marc Lamont Hill argued that Huckabee had to speak up for the Duggars because they had endorsed him in the 2016 presidential race. He also said that Ferguson was being too hard on the Duggars:

However, Ferguson countered that the Duggars should be held to a high ethical standard because the family did so as part of its public persona:

“They were the ones who talked about ‘incest should be punishable by you being dead afterwards’. They put themselves in a moral place to be a light to others. And yet, in reality, in their own world, they were covering it up to keep the brand alive.”