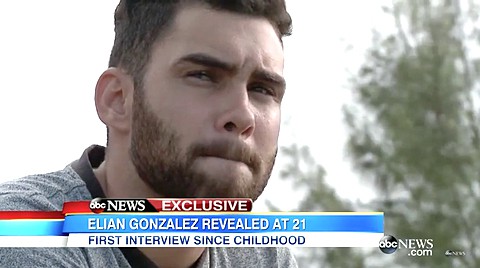 Elian Gonzalez, the Cuban icon who was at the center of a gripping custody battle in 1999 after he was found adrift off the Florida coast, is 21-years-old now and gave his first interview since childhood to ABC News.

Given Cuba's relationship with the U.S., there has been little contact with Gonzalez over the years, though photos of him as a teenager offered insight as to how he was growing up.

Gonzalez now says he wants to come back to the U.S.:

"To the American people, first I say thank you for the love they give me. I want the time to give my love to American people…For my family it has always been, we always have the desire to say to the American people, to say to each household our gratitude, appreciation and love that we have," he said. "Perhaps one day we could pay a visit to the United States. I could personally thank those people who helped us, who were there by our side. Because we're so grateful for what they did."