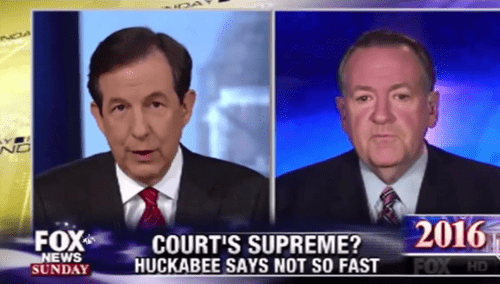 During his 2016 presidential campaign announcement earlier this month, you may recall Mike Huckabee taking a thinly veiled shot at the Supreme Court’s upcoming ruling on same-sex marriage, saying:

“Many of our politicians have surrendered to the false god of judicial supremacy which would allow black robed and unelected judges the power to make law as well as enforce it.”

On Fox News Sunday earlier today, host Chris Wallace decided to give the evangelical favorite a refresher on Marbury v. Madison as well as history lesson on a fellow, former Arkansas governor who thought he didn’t have to follow the Supreme Court either.

Can’t blame the Huckster for not knowing these things though, he was probably busy reading his Bible in class as a kid instead of the textbook.

Watch Wallace ask whether Huckabee would have followed a Supreme Court order on desegregation, AFTER THE JUMP…

Previous Post: « Bono Dedicates ‘Pride (In The Name of Love)’ to Ireland’s Marriage Equality Victory at Phoenix Concert: VIDEO
Next Post: Irish Priest Who Bravely Came Out as Gay in January Thanks Parishioners for Accepting Him »