Father Martin Dolan, the parish priest at the Church of St. Nicholas of Myra in Dublin city center who received a standing ovation from his congregation when he came out of the closet during mass in January, is speaking out again in the wake of Ireland's successful marriage equality referendum, the Irish Times reports: 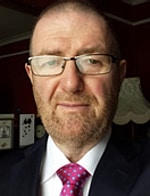 Dolan…told his congregation on Saturday evening that the Irish public had heard the “pleas of desperation of a minority” from the LGBT community and had made the LGBT cause “as important as their own”.

He said he was proud to be Irish and thanked his parishioners for accepting him as a gay man. Fr Dolan first came out as a gay man in January when he urged his congregation to vote Yes in the marriage equality referendum.

Dolan responded to the Archbishop of Dublin's recent comments that the Catholic Church needed a new language when dealing with youth by saying that "With great respect, it is not a new language that we need but a new way of being and living."

“Jesus was always reaching out to people on the edges of society. His whole way of being was to draw people in and to include them rather than exclude them. God’s spirit was given to us so we can be a power and force in the world. The opportunity for new beginnings begin every day of our lives. It comes every time we draw breath. We have a choice – we can build bridges for people or we can build stone walls. We have to become people of love, joy, patience, kindness, goodness, faithfulness and self-control."