A church in Georgia known for stating extreme beliefs has posted a sign threatening gay people with death, reports WXGA.

The sign which reads “Homosexuality is a death worthy crime!” was spotted outside the Ten Commandments Church in Milledgeville by local man Robert Owens.

"This is the first time that I have ever seen anything that actually crossed the line and was inferring death upon a group.

"If it said being bald or blind or short or fat or blue-eyed or red head, if any of those were death worthy crimes, if they were causing people think ‘wow those people really need to die’, that's a terrible thing, that's crossing line.” 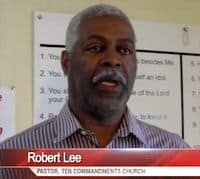 Ten Commandments Pastor Robert Lee said there is nothing wrong with the sign which is just quoting Leviticus 20:13, a scripture in the Bible:

“If a man has sexual relations with a man as one does with a woman, both of them have done what is detestable. They are to be put to death; their blood will be on their own heads.”

However, Lee said that “the institution of marriage was instituted by God and it should not be changed by people who deserve not to live.” Lee added he would die before he "accepted" homosexuality and welcomed gays into his church.

Previous Post: « Unwrap Some ‘Chocolate City’ In This Sexy Debut Trailer: VIDEO
Next Post: Ellen Has a Surprise for the Straight Guy and the Gay Best Friend He Invited to Prom: VIDEO »