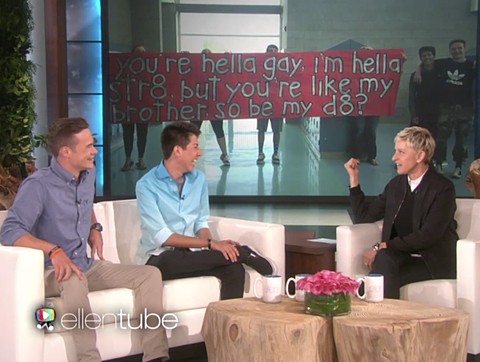 Last week we reported on Anthony Martinez, the gay student at Desert Oasis High School, who tweeted that he really wanted a guy as his date to prom. Jacob Lescenski, his straight best friend, stepped in with a "promposal" that is one of the sweetest we've ever seen.

Ellen invited the two best friends on her show to let more of the world know their story. 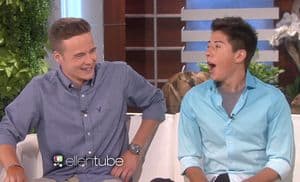 Lescenski, who is as sincere and genuine as his promposal, explained how he came to accept and embrace Martinez's crush on him, and become a supporter of gay rights, deciding to express himself with a gesture of love for his friend.

"If that can't be an example for people in the world to know that we just – that you have a date with your friend who you had a crush on and he's open-minded enough to do this. We have teachers who drove in from Las Vegas, your parents are in the audience. Good for you.

I just wanted to say I know that there are some schools out there that don't support this and wouldn't allow this to happen and it's really a shame because prom is very important to a lot of people."

She then rewarded the couple for making a difference.