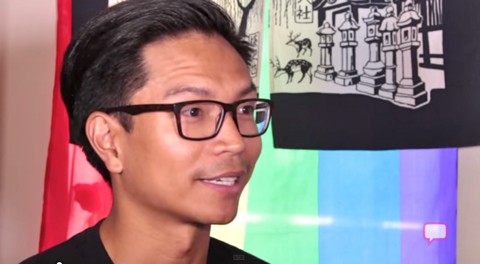 When Carlo, a gay Catholic from Sydney, Australia, told his aunt he was gay, she began sobbing uncontrollably.

When she finally calmed down, she explained that she needed to grieve the loss of the image she built up for him of having a wife and children.

"I said to her, 'I get that, but I want to make sure you understand: I still want that,'" Carlo recalls. "'I still want to have a family, but it's just going to look different. It's going to be with a man as opposed to a woman.'"

Carlo tells his coming out story as part of Nathan Manske's "I'm From Driftwood" project. He says he didn't come out until 25, largely because of his Catholic upbringing, including his image of the perfect family as a father, mother and children.

Finally, he began telling his friends he was gay, but he knew he hadn't really come out until he told his parents. He did it as they were driving to church for a Catholic mass.

"I said to them, 'Mom, dad, I'm attracted to men," he recalls. "There was a bit of silence for a moment, but Dad was the first person to chime up and say 'Carlo, as long as you're happy, we're happy,'" Carlo says. "And mom soon thereafter said: 'You can't change who you are. This is you, and we want you to be you.' So I was actually surprised that they didn't have any more questions."

Carlo later explained to his parents that he didn't plan to follow the church's teaching that you can be gay as long as you're celibate, which was slightly harder for them to understand. A few weeks later, he was making cake decorations with his aunt.

"My auntie jokingly said, 'Maybe you could make some of these pink rose cake decorations for your girlfriend,'" Carlo recalls. "I said, 'Well, that will never happen, because I'm actually gay.'"

Once his aunt stopped crying, she said she was grateful that he told her because it would allow them to have a deeper relationship.

"What I've learned is that I can be gay and I can be Catholic and the two can actually build on each other, and strengthen both parts of my identity," Carlo says.

Watch Carlo tell his coming out story, AFTER THE JUMP …

Previous Post: « Irish Priest Who Bravely Came Out as Gay in January Thanks Parishioners for Accepting Him
Next Post: Meanwhile, In Westeros: ‘Game Of Thrones’ 05×07 [Recap] – SPOILERS »