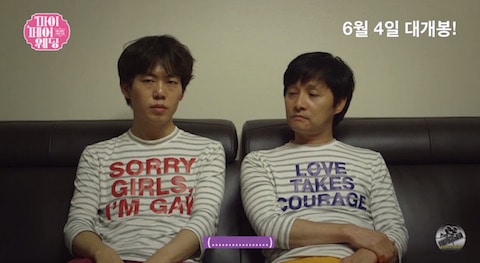 South Korea, like many places in the world and in too much of the U.S., bans gay marriage. South Korean gays, like in many places in the world and in increasingly more places in the U.S., are reaching the point of not caring what the bans are and are getting married anyways, governmental recognition be damned. Such is the case with Kim Jho Gwang-soo and Kim Seung-hwan, a South Korean gay couple whose marriage became the subject of a documentary by Jang Hee-sun entitled My Fair Wedding.

The documentary follows the couple along their journey to wedded bliss, from the planning stages to the challenges of telling their families to the ceremony itself in downtown Seoul. Despite the pushback they received from anti-gay protesters, the two felt that this was necessary in order to raise awareness of sexual minorities in South Korea. Said Kim Jho,

Through this film, we would like to show that we are not different from heterosexuals.

Hopefully this will facilitate legislation in South Korea that, like many places in the world and in most of the U.S., legally recognizes same-sex marriage. The film will be released in South Korea on June 6, 2015, and you can watch the trailer AFTER THE JUMP…

Previous Post: « Nine More States Comply With Federal Prison Rape Law, But DOJ Rejects Texas Governor’s Letter
Next Post: Honoring All Who Have Given Their Lives Serving Our Country »