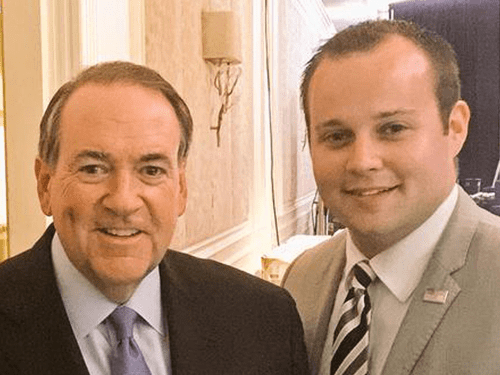 Mike Huckabee is throwing his support behind reality TV's embattled Duggar clan in the wake of allegations that eldest son Josh Duggar sexually abused five underage girls over a decade ago.

Josh Duggar resigned from his position as executive director of the anti-gay hate group Family Research Council's lobbying arm yesterday, saying in a statement "Twelve years ago, as a young teenager, I acted inexcusably for which I am extremely sorry and deeply regret. I hurt others, including my family and close friends."

Janet and I want to affirm our support for the Duggar family. Josh’s actions when he was an underage teen are as he described them himself, 'inexcusable,' but that doesn’t mean 'unforgivable.' He and his family dealt with it and were honest and open about it with the victims and the authorities. No purpose whatsoever is served by those who are now trying to discredit Josh or his family by sensationalizing the story. Good people make mistakes and do regrettable and even disgusting things. The reason that the law protects disclosure of many actions on the part of a minor is that the society has traditionally understood something that today’s blood-thirsty media does not understand—that being a minor means that one's judgement is not mature. No one needs to defend Josh’s actions as a teenager, but the fact that he confessed his sins to those he harmed, sought help, and has gone forward to live a responsible and circumspect life as an adult is testament to his family’s authenticity and humility. Those who have enjoyed revealing this long ago sins in order to discredit the Duggar family have actually revealed their own insensitive bloodthirst, for there was no consideration of the fact that the victims wanted this to be left in the past and ultimately a judge had the information on file destroyed—not to protect Josh, but the innocent victims. Janet and I love Jim Bob and Michelle and their entire family. They are no more perfect a family than any family, but their Christian witness is not marred in our eyes because following Christ is not a declaration of our perfection, but of HIS perfection. It is precisely because we are all sinners that we need His grace and His forgiveness. We have been blessed to receive God’s love and we would do no less than to extend our love and support for our friends. In fact, it is such times as this, when real friends show up and stand up. Today, Janet and I want to show up and stand up for our friends. Let others run from them. We will run to them with our support

In Touch, the tabloid that broke the story earlier this week, reported yesterday that Duggar patriarch Jim Bob waited more than a year after his son Josh confessed to sexually molesting several female minors before contacting police.

The Washington Post notes Huckabee recently received the endorsement of the Duggar family in the 2016 presidential race.

The Duggars are the stars of TLC's 19 Kids and Counting and have been active opponents of LGBT rights. The network announced today it would pull the show from its schedule as a result of the controversy.