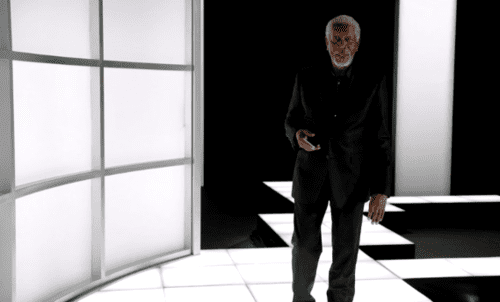 According to Morgan Freeman, you and I are kidding ourselves with our attempts at logic-ing away widespread discrimination. In a recent episode of "Through The Wormhole", Freeman digs into the social psychology that plays an integral part in the ways in which racial biases factor into our senses of danger and safety. Racism, Freeman explains, is more than a mere function of misunderstanding. Rather, it’s the result of a life’s worth of how law enforcement officers are trained to respond to perceived threats.

“On average, white subjects are quicker to shoot the black male and are 30-40% more likely to mistake his phone for a gun,” Freeman explained of tests that have been conducted to understand how the police conceptualize black men. “When [this experimentation was performed with law enforcement officers], he finds that their expert training significantly reduced the occurrence of fatal mistakes.”

While it may be easy to explain the explicitly black-bias away as baseline American racism, The Science Channel found that a discrimination against black study participants was just as strong.

“We think this represents an awareness of a cultural stereotype,” Joshua Correll explains. “Not that our participants–necessarily–that black men are more dangerous than white men. But by virtue of [news reports,] they’re getting the idea that black male goes with violent.”

Watch as Morgan Freeman asks, "Are We All Bigots?", AFTER THE JUMP…