Sylvia Driskell, a 66-year-old Auburn, Nebraska woman, has filed a federal lawsuit with the U.S. District Court in Omaha against all homosexuals, the Omaha World-Herald reports:

Citing Bible verses, Driskell contends “that homosexuality is a sin and that they the homosexuals know it is a sin to live a life of homosexuality. Why else would they have been hiding in the closet(?)”

Driskell wrote in a seven-page petition to the court that God has said homosexuality is an abomination. She challenged the court to not call God a liar.

She spelled it "lier," according to the Lincoln Journal-Star.

“I never thought that I would see a day in which our great nation or our own great state of Nebraska would become so compliant to the complicity of some people(’s) lewd behavior.”

The handwritten complaint lists the defendants as:

Their Given Name Homosexuals

Driskell says she is an ambassador for God and his son, Jesus Christ. 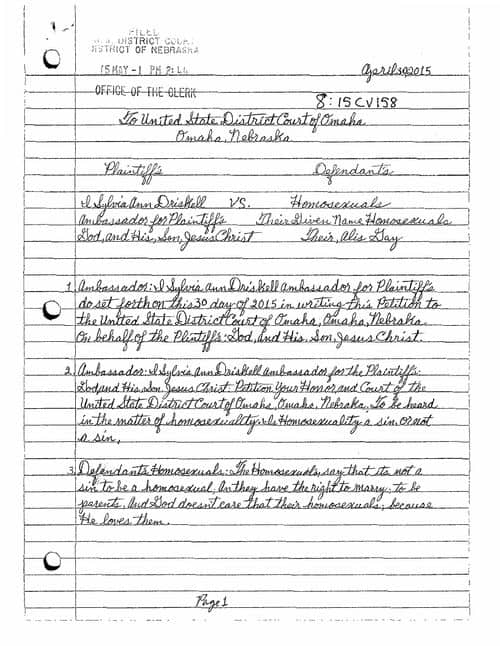