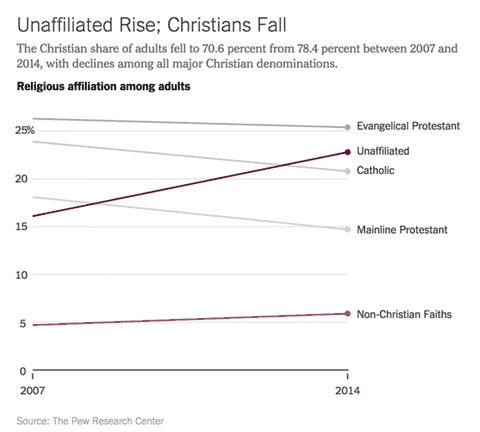 The study doesn't reveal an exact explanation behind the decline of identifying Christians, but the low numbers of identifying Christians among millennials and educated youth indicates that a religiously unaffiliated generation is rising. The study shows that the number of the religiously unaffiliated increased to 56 million, up from 36 million in 2007; a 16 percent increase. Notably, ex-Christians, or those who left the faith, now represent 19 percent of adults.

Another trend in the data shows that as time goes on, younger millennials are more likely to be less affiliated with religion than their older cohorts. Many argue that the declining number of Christians amongst youth is a result of political backlash against Republicans and conservatives' religious association with political values; Mike Hout, a professor of sociology at New York University, concurs with the findings:

"The two are now intertwined. You can't use one to predict the other, because if the Republicans switched to more economic or immigration issues, then perhaps the rise of the unaffiliated will slow down."

However, non-Christian faiths within the U.S. remained relatively unaffected, with Judaism, Islam and Hinduism either remaining relatively unchanged or experiencing slight growth. Islam grew the most experiencing a .5 percent increase in practitioners and followers.