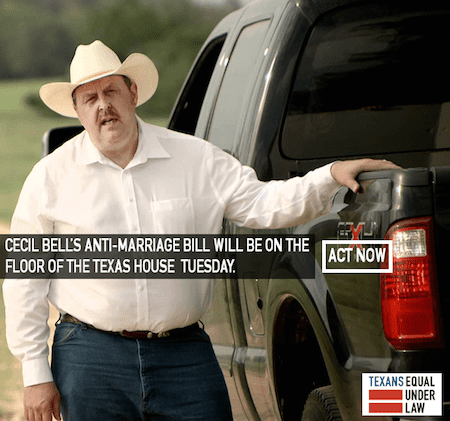 Last week, we told you how witnesses compared same-sex marriage to bestiality and pedophilia when they testified in support of a bill that would prevent churches and pastors from being forced to participate in gay weddings.

On Monday, the Texas Senate responded by advancing the bill in a 21-10 vote, with one Democrat joining the chamber's 20 Republicans.

The Texas Tribune reports on passage of the so-called "Pastor Protection Act":

State Sen. José Rodríguez, an El Paso Democrat who voted against the measure, questioned whether it could be used to justify a refusal to perform interracial marriages — shielding religious officials from prosecution "no matter how extreme [their] views are."

Pointing out that same-sex marriage is banned in Texas, state Sen. John Whitmire, D-Houston, asked what problem the bill was trying to fix.

Whitmire said it was "unheard of" that a same-sex couple would try to force a pastor to perform a wedding ceremony if that pastor did not accept their marriage.

"They just want to be left alone to love their partner, they want to get married with clergy in a setting that embraces that union," he said.

More from the The American-Statesman:

The legislation also stipulates that clergy, religious organizations and people employed by a religious group could not be sued for damages, prosecuted for criminal violations, lose tax-exempt status or forfeit a government contract or grant for refusing to provide services, open facilities or sell goods related to same-sex marriages.

“I think the language is awfully broad,” said Sen. Kirk Watson, D-Austin, adding that a clause protecting groups supervised and controlled by a religious organization would seem to allow for-profit health care, nursing home and other companies to refuse to serve same-sex couples.

The Texas House is set to vote on an identical bill Tuesday.

Also Tuesday, the House will vote on a far more dangerous bill, by Rep. Cecil Bell (above), that seeks to undermine a U.S. Supreme Court ruling in favor of same-sex marriage.

The bill would bar state and local employees from issuing, enforcing or recognizing same-sex marriage licenses—and prohibit public monies from being used to do so—regardless of any court order.

LGBT advocates say if the high court rules in favor of same-sex marriage, HB 4105 would set up a showdown between state and federal law, costing Texas millions of dollars in litigation and potentially delaying the effectiveness of the decision by years. They say the bill would unleash chaos similar to what’s been seen in Alabama over same-sex marriage, and generate the type of business backlash associated with passage of an anti-LGBT religious freedom law in Indiana. …

Rebecca Robertson, legal and policy director at the ACLU of Texas, said HB 4105 is designed to give Texas another legal basis for challenging same-sex marriage in court: state sovereignty. And she said it could be used as a model by other states for resisting the Supreme Court ruling.

“The last time that we saw similar efforts to undermine court rulings about what the Constitution requires was when Southern states attempted to use the power of the purse to avoid having to comply with federal court orders ordering school desegregation,” Robertson said. “Those tactics were rejected, but obviously it took years of litigation to get to that point. HB 4105 is trying to do the same kind of end run around the Constitution.”

Despite comparisons to Indiana's religious freedom law, few businesses have come out publicly against the Texas anti-gay marriage bill, according to The Washington Blade:

As Texas lawmakers prepare to vote on legislation aimed at circumventing an anticipated U.S. Supreme Court decision in favor of same-sex marriage, the state's business leaders are largely keeping quiet.

The business community's opposition in Indiana helped ignite a media firestorm against a religious freedom law there that is so far absent in the Texas debate. …

Robert Wood, spokesperson for the Texas Association of Businesses, said his organization hasn't "taken any position, nor testified" on the legislation and doesn't have any comment at this time.

You can take action against House Bill 4105 here and here.