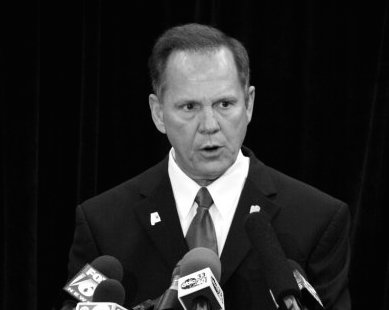 Active gay marriage opponent and Alabama Supreme Court Chief Justice Roy Moore (above) is grasping at straws to delay the issuing of marriage licenses to same-sex couples in his state. Originally, the justice had said that a court order from the state’s stayed ruling conflict from May had yet to be resolved, and in the court order’s “25-day period,”  “no [probate judge] has to issue a marriage license to a same sex couple.”

Speaking with The Hill, Alabama ACLU executive director Susan Watson, offers clarification on Moore’s statements. Watson says probate judges are now under an injunction, and that the court’s orders Moore cites no longer apply. She says Moore is “just kicking and screaming and pitching a fit and trying to slow down marriage…He can ask for a rehearing all he wants, and the Alabama Supreme Court has the right to do that, but what’s different in Alabama is, we have a federal court judge who said as soon as the Supreme Court rules, her stay would be lifted.”

Watson says that while she has heard of some probate judges in Alabama who are no longer issuing any marriage licenses, she only knows of one probate judge who is simply ignoring the injunction.