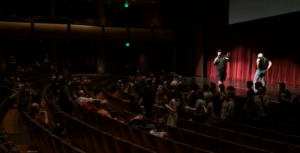 Brian Klawiter, the owner of the Grandville, Michigan auto shop who made headlines in April for vowing he “would not hesitate to refuse service to an openly gay person or persons” but that gun owners would receive a discount at his shop, is back in the news after hosting a “God and Country” forum at a local performing arts theater that quickly devolved into a series of shouting matches between supporters and opponents.

Klawiter’s event was also notable for bringing some of the nuttiest anti-gay bigots out of the woodwork, such as Republican national committeeman and former state representative Dave Agema, right-wing blowhard ‘Coach Dave’ Daubenmire, and Christian rocker/Michele Bachmann pal Bradlee Dean. 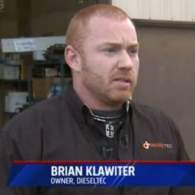 “We’re not looking for a fight,” said Klawiter, while talking to an Ottawa County sheriff’s captain about security and dealing with outbursts prior to the the forum at the Jenison Center for the Arts.

But a verbal struggle — and a brief physical altercation — is exactly what transpired as Klawiter and others, including Republican national committeeman and former state representative Dave Agema invoked the Bible to say homosexuality is a sin.

Agema took the microphone first to revisit several of the discredited “homosexual statistics” that landed him in his own controversy two years ago.

Between nearly every sentence, a protester would shout. Eventually, in unison, they chanted “Gay is OK!”

Watch footage from the hate forum below: