Last year, the social media deity was responsible for a billboard in Topeka, Kansas, the hometown of the increasingly silly Westboro Baptist Church (WBC).

The new sign on Interstate 15 in Utah reads "God Loves Gays," surrounded by the Man himself backed by a Pride rainbow.

Do you want a God Loves Gays billboard in your area? 😀 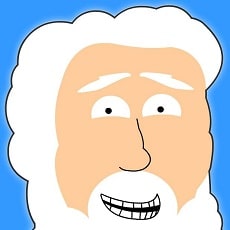 A second sign on 3900 South in Salt Lake City will be displayed starting June 15 until the end of the month.

According to a press release, God is also working on a campaign to erect similar billboards “all over the USA and the world."

In a statement, the almighty confirmed:

“Mormons still think that Heavenly Father hates gay people, which is FALSE!. I’m placing these billboards in Utah to set the record straight on the subject, now and forever. GOD LOVES GAYS. And I’m totally cool with their lifestyle too. Why else would I make so many wonderful gay Mormons?”

It's currently unclear if WBC has the resources available to picket God's work due to work commitments at a fictional wedding this weekend.