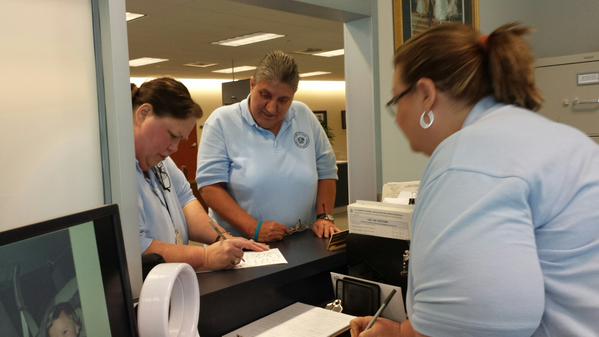 Louisiana has finally begun issuing marriage licenses to same-sex couples. Louisiana had been the only state in which same-sex marriages had not been performed after the Supreme Court’s ruling on marriage equality.

Despite statements from Governor Bobby Jindal that the state would wait until the 5th Circuit Court issued its ruling on same-sex marriage, the clerk of court in Jefferson Parish was satisfied that the Supreme Court’s ruling on Friday provided him the authority to begin marrying same-sex couples.

The first couple to get married in Louisiana are Celeste Autin and Alesia LeBoeuf (pictured above). The pair work at the Jefferon Parish clerk’s office, according to WBRZ.

Clerk of Court Jon Gegenheimer announced Monday (June 29) that his office would begin providing the licenses after the U.S. Supreme Court ruled Friday that same sex-couples had the right to marry in all 50 states.

The first Jefferson license was issued after 10:30 a.m., according to a worker at the clerk’s office.

Gegenheimer said the decision was made after his attorney reviewed the Supreme Court ruling over the weekend. “He’s been studying the opinion for three days. I got a call from him that said to go ahead,” Gegenheimer said. “I started issuing licenses effective 10:05.”

Jones said his office is in contact with the state Clerks of Court Association and is working to get the forms changed. Jones also said they are waiting on the 5th U.S. Circuit Court of Appeals in New Orleans, which is expected to reverse its previous ruling sometime today.

East Baton Rouge is slated to begin granting marriage licenses to same-sex couples at 1 PM local time according to WBRZ.

UPDATE: A same-sex couple has married in New Orleans as well.

Meanwhile Governor Bobby Jindal has announced that clerks can opt out of performing same-sex marriages if it conflicts with their religious beliefs. From The Times-Picayune: