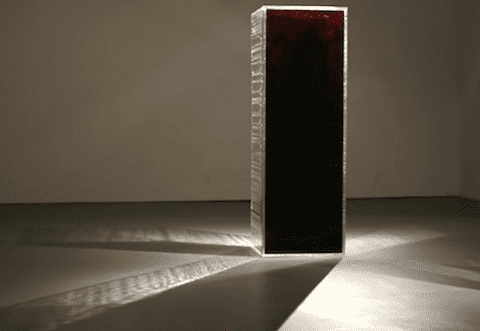 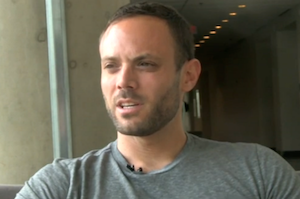 The project took Eagles two years to complete and is currently on display at the American University Museum at the Katzen Arts Center in Washington, D.C., till this fall. As the name suggests, viewers of the exhibit can see reflections of themselves in the blood while standing closely in front of it.

Eagles’ monolith contains the blood of nine gay or bisexual men, including blood from a gay Nigerian refugee living in New York city and a gay army captain who was dismissed under Don’t Ask, Don’t Tell. Although the FDA is revising its policy allowing gay and bisexual men to donate blood, the policy requires an unrealistic caveat that gay and bisexual men must remain celibate for a whole year before they can donate. The FDA’s current proposal is open for public comment until July 14.

Filmmaker Leo Herrera shot a short film documenting Eagles’ project and interviewed some of the nine men who donated their blood to the project. Watch the making of the art installation, along with discussions regarding the stigma surrounding HIV and gay blood donations, below: