The 2016 GOP presidential candidates reacted to today’s historic ruling on marriage equality with varying degrees of sadness and outrage. A few, however, took a slightly conciliatory tone in their response.

The Supreme Court has spoken with a very divided voice on something only the Supreme Being can do – redefine marriage. I will not acquiesce to an imperial court any more than our Founders acquiesced to an imperial British monarch. We must resist and reject judicial tyranny, not retreat.

This ruling is not about marriage equality, it’s about marriage redefinition. This irrational, unconstitutional rejection of the expressed will of the people in over 30 states will prove to be one of the court’s most disastrous decisions, and they have had many. The only outcome worse than this flawed, failed decision would be for the President and Congress, two co-equal branches of government, to surrender in the face of this out-of-control act of unconstitutional, judicial tyranny.

The Supreme Court can no more repeal the laws of nature and nature’s God on marriage than it can the laws of gravity. Under our Constitution, the court cannot write a law, even though some cowardly politicians will wave the white flag and accept it without realizing that they are failing their sworn duty to reject abuses from the court. If accepted by Congress and this President, this decision will be a serious blow to religious liberty, which is the heart of the First Amendment.

“Guided by my faith, I believe in traditional marriage.  I believe the Supreme Court should have allowed the states to make this decision.  I also believe that we should love our neighbor and respect others, including those making lifetime commitments.  In a country as diverse as ours, good people who have opposing views should be able to live side by side.  It is now crucial that as a country we protect religious freedom and the right of conscience and also not discriminate.”

While I strongly disagree with the Supreme Court’s decision, their ruling is now the law of the land.

I call on Congress to make sure deeply held religious views are respected and protected.  The government must never force Christians to violate their religious beliefs.

I support same sex civil unions but to me, and millions like me, marriage is a religious service not a government form.

This is only the latest example of an activist Court ignoring its constitutional duty to say what the law is and not what the law should be. Justice Alito spoke for so many of us when he said that “[t]oday’s decision usurps the constitutional right of the people to decide whether to keep or alter the traditional understanding of marriage…All Americans, whatever their thinking on that issue, should worry about what the majority’s claim of power portends.”

The Court ruled today that all Americans should receive equal benefits and rights from the government under the law. I have always supported this view. However, this decision was also about the definition of marriage itself. I do not agree that the Court can or should redefine marriage. I believe that responsibility should have remained with states and voters where this conversation has continued in churches, town halls and living rooms around the country.

Moving forward, however, all of our effort should be focused on protecting the religious liberties and freedom of conscience for those Americans that profoundly disagree with today’s decision.

The Court did not and could not end this debate today. Let us continue to show tolerance for those whose opinions and sincerely held beliefs differ from our own. We must lead by example, finding a way to respect one another and to celebrate a culture that protects religious freedom while promoting equality under the law.

“I am a proud defender of traditional marriage and believe the people of each state should have the right to determine their marriage laws. However, the Supreme Court has ruled that state bans on gay marriage are unconstitutional, and I will respect the Court’s decision. Furthermore, given the quickly changing tide of public opinion on this issue, I do not believe that an attempt to amend the U.S. Constitution could possibly gain the support of three-fourths of the states or a supermajority in the U.S. Congress. Rather than pursing a divisive effort that would be doomed to fail, I am committing myself to ensuring the protection of religious liberties of all Americans. No person of faith should ever be forced by the federal government to take action that goes against his or her conscience or the tenets of their religion. As president, I would staunchly defend religious liberty in this nation and would devote the necessary federal resources to the protection of all Americans from any effort to hinder the free and full exercise of their rights. While we have differences, it is time for us to move forward together respectfully and as one people.”

“The Supreme Court decision today conveniently and not surprisingly follows public opinion polls, and tramples on states’ rights that were once protected by the 10th Amendment of the Constitution.  Marriage between a man and a woman was established by God, and no earthly court can alter that.

This decision will pave the way for an all out assault against the religious freedom rights of Christians who disagree with this decision. This ruling must not be used as pretext by Washington to erode our right to religious liberty.

The government should not force those who have sincerely held religious beliefs about marriage to participate in these ceremonies. That would be a clear violation of America’s long held commitment to religious liberty as protected in the First Amendment.

I will never stop fighting for religious liberty and I hope our leaders in D.C. join me.”

“I am disappointed the Supreme Court today chose to change the centuries old definition of marriage as between one man and one woman. I’m a firm believer in traditional marriage, and I also believe the 10th Amendment leaves it to each state to decide this issue. I fundamentally disagree with the court rewriting the law and assaulting the 10th Amendment. Our founding fathers did not intend for the judicial branch to legislate from the bench, and as president, I would appoint strict Constitutional conservatives who will apply the law as written.”

“While I disagree with this decision, we live in a republic and must abide by the law. …

I firmly believe the question of same sex marriage is a question of the definition of an institution, not the dignity of a human being. Every American has the right to pursue happiness as they see fit. Not every American has to agree on every issue, but all of us do have to share our country. A large number of Americans will continue to believe in traditional marriage, and a large number of Americans will be pleased with the Court’s decision today. In the years ahead, it is my hope that each side will respect the dignity of the other.”

“As President, I will be committed to using the bully pulpit of the White House to lead a national discussion on the importance to our economy and our culture of mothers and fathers entering into healthy marriages so that every child is given their birthright- to be raised by their mother and father in a stable, loving home. I will stand for the preservation of religious liberty and conscience, to believe what you are called to believe free from persecution. And I will ensure that the people will have a voice in decisions that impact the rock upon which our civilization is built.” 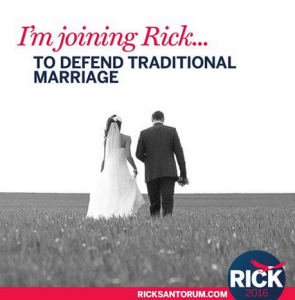 He also posted the above photo on his Facebook:

Today, 5 unelected judges redefined the foundational unit of society. Now it is the people’s turn to speak…

Once again the Bush appointed Supreme Court Justice John Roberts has let us down. Jeb pushed him hard! Remember!

Ted Cruz, George Pataki, and Rand Paul have yet to publicly react to the news. This post will be updated with their reactions.