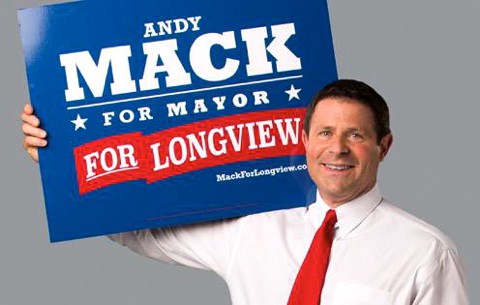 The mayor of conservative Longview, Texas, has issued a proclamation declaring June LGBT Pride month. However, Mayor Andy Mack also told The Longview News Journal that LGBT Pride "does not coincide with my personal beliefs."

Mack is the first mayor to issue such a proclamation, after his predecessor declined to do so last year. The proclamation, one of 10 Mack has issued since taking office last month, will be read at the city's second annual LGBTQ Pride Festival on June 13.

But Mack's proclamation comes with a caveat.

From the News Journal:

Mack also said approving any proclamation did not mean he personally agreed with its message.

"I am not advocating for anyone or anything. This does not coincide with my personal beliefs. It does not, but everyone has a right to assemble in an orderly manner. They have the right to express themselves," Mack said. "I don't get to pick and choose as the mayor who I represent and who I don't represent."

Mack is also taking heat from anti-LGBT residents for issuing the proclamation:

Tanya Simms said she understands that — as a civic leader — Mack can't impose his beliefs from the dais. But, as a deacon of a church, she wishes he would have simply abstained from lending his — and the city's — wholesale endorsement.

"I know you have to be careful now, because one wrong step and someone will file a lawsuit," she said. "At the same time, just caving in to the tide of public opinion isn't the answer."

One longtime former city firefighter posted this below the story:

The previous mayor, Jay Dean, wrote a letter of support of the LGBT Pride celebration instead of issuing a proclamation last year:

"I am a Catholic Christian, and in our faith, we don't recognize that particular persuasion, nor do we judge."

Read the full text of Mack's proclamation, AFTER THE JUMP …

WHEREAS, On June 27, 1969 the New York City Police Department raided the Stonewall Inn, a bar that was frequented by members of the LGBT community; and

WHEREAS, The Stonewall Riots marked the beginning of the liberation movement that transformed the oppression of lesbians, gay, bisexual and transgender people into calls of pride and action; and

WHEREAS, The resistance led to the LGBT Movement in America and the LGBT Pride Month, where we commemorate the events of June 1969 and commit to achieving equal justice under the law for LGBT Americans; and

WHEREAS, Longview has a diverse LGBT community, which includes individuals from all walks of life including doctors, lawyers, police officers, nurses, construction workers, professionals of all types, teachers, and religious leaders; and

WHEREAS, Longview's LGBT Community has the right to feel safe and not live with fear of harassment and persecution and not be discriminated against; and

WHEREAS, LGBT youth are four times more likely to attempt suicide than their straight peers, and more than 1/3 of LGBT youths have attempted suicide and nine out of ten LGBT youths report harassment at school, and three-fifths report feeling unsafe at school; and

WHEREAS, On this special occasion, we must bear in mind that while we have overcome difficult obstacles, tolerance and acceptance is something we must all practice and teach future generations.

NOW THEREFORE, I, Andy Mack, by the authority vested in me as Mayor of the City of Longview, Texas do hereby proclaim June 2015 as LGBT Pride Month in Longview.