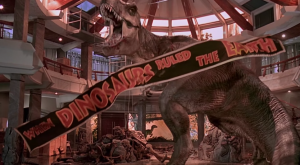 After over two decades of waiting following the release of Jurassic Park, audiences are finally able to witness what a “fully functional” dinosaur theme park would look like now that Jurassic World has arrived in theaters.

But over the years did you ever stop to wonder just how much John Hammond’s original prehistoric park would have cost him? After all, cloning dinosaurs doesn’t seem like a cheap endeavor

Take a deep breath and find out below: