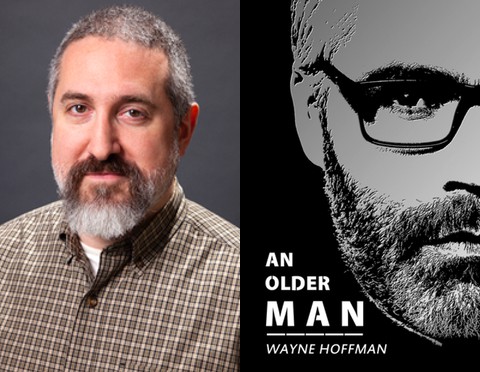 This week’s TowleREAD comes from author Wayne Hoffman from his new novel An Older Man, a follow-up to his debut novel Hard.

Hoffman spoke with Towleroad about the excerpt he selected to read:

In my new novel, An Older Man (Bear Bones Books), Moe is back, but now he’s over forty, overweight, and going gray. For someone used to being the adorable younger guy chasing after older men, that’s not particularly easy. But Moe’s whole conception of himself is challenged when he spends Bear Week in Provincetown.

Still singular in his focus and sexual appetites, Moe hopes he’ll find a hot older guy — at tea dance, walking down Commercial Street, or cruising the Dick Dock — and have an intense summer fling. But things aren’t going exactly as planned. Joining him on vacation is Moe’s ex-lover Gene and Gene’s new boyfriend Carlos, so Moe has no reason to feel lonely, but when the older objects of Moe’s affection start looking right past him in favor of younger rivals, Moe is shaken to the core. One thing is certain: When Moe gets on the ferry to go home after a week in Provincetown, he won’t be the same man he was when he arrived.

In this excerpt from the first chapter, Moe has just arrived in Provincetown, and he’s headed to the Dick Dock on a bear hunt.

For those of you who are going to be in Provincetown for Bear Week, Hoffman will be reading from both Hard and An Older Man and signing books at the Marc Jacobs Reading Room at the Provincetown Public Library on Thursday, July 16 at 7 pm.

As part of its sponsorship of TowleREAD, Audible is offering a free download of Hoffman’s novel Sweet Like Sugar at Audible.com with a 30-Day Trial membership for Towleroad readers.

Wayne Hoffman is the author of three novels: An Older Man, Hard, and Sweet Like Sugar, which won the Stonewall Book Award. His short stories and essays have also appeared in such collections as Best Gay Stories 2010, Mama’s Boy, Fresh Men 2, Boy Meets Boy, and others. A longtime journalist, he has written for the Washington Post, Village Voice, Out, The Forward, Billboard, and elsewhere; he is currently executive editor for Tablet magazine. He lives in New York City and the Catskills.