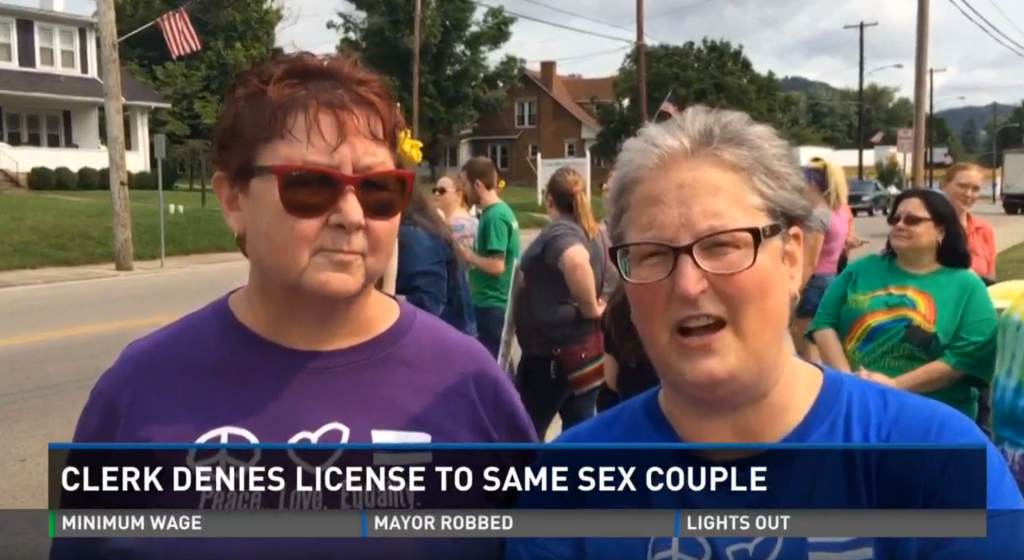 The other day we told you how a few county clerks in Kentucky stopped issuing marriage licenses to all couples to avoid issuing them to same-sex couples.

Now, the ACLU has filed a federal class action lawsuit against one of those clerks, Kim Davis (below right) of Rowan County, on behalf of two gay couples and two straight ones.

From the ACLU’s release: 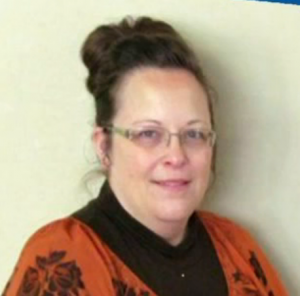 In explaining the ACLU’s decision to file suit on the couples’ behalf, ACLU of Kentucky Cooperating Attorney Laura Landenwich stated, “Ms. Davis has the absolute right to believe whatever she wants about God, faith, and religion, but as a government official who swore an oath to uphold the law, she cannot pick and choose who she is going to serve, or which duties her office will perform based on her religious beliefs.”

In explaining why obtaining a marriage license in Rowan County, as opposed to a neighboring county is important, Plaintiff Aaron Skaggs stated, “We have been citizens of Rowan County since the beginning of our relationship and love being members of this community. So, it only makes sense that we would want and should be granted our right to be recognized as a loving couple having freedom to marry here at home.”

Commenting on the suit, the ACLU of Kentucky Executive Director Michael Aldridge stated, “When our laws are updated or changed, government officials have a duty and a responsibility to impartially administer those laws.”

About 75 people protested outside Davis’ office on Tuesday, including Miller and Roberts (above).

Gov. Steve Beshear, Attorney General Jack Conway and Bill May, executive director of the Kentucky County Clerks Association, have all advised county clerks to issue licenses to same-sex couples. In addition to lawsuits, they say clerks could face criminal charges for official misconduct.

But Davis told WHAS-TV that she’ll never issue a marriage license to a gay couple, even if it means getting thrown out of office:

“I have convictions that rule my conscience.” …

“I can’t put my name on a marriage license as issued to a same sex couple,” Davis explained. …

“God is my first love, and I will stand for Him,” Davis said. “And if it means I get thrown out of office, we’ll deal with that when it comes.”

“He made man his own image and he saw that man needed a companion, so he put him to sleep,” Davis said. “And He took a rib from Adam and he made Eve. He ordained marriage from the very beginning of time, eons ago, that marriage is between a man and a woman. And it is a sacred union. And I just cannot separate my conscience from that.”