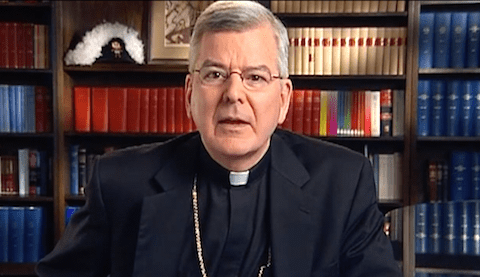 An internal church probe is investigating allegations against anti-gay Archbishop John Nienstedt that he cruised parks, sought poppers, inappropriately touched understudies and went to gay clubs in the 1980s reports The Star Tribune.

The probe, commissioned by Archdiocese of St. Paul and Minneapolis, collected affidavits from several priests and former seminarians alleging that Nienstedt visited gay clubs around Detroit in the early 1980s along with reports of inappropriate touching. Nienstedt resigned June 15 after Ramsey County prosecutors filed criminal and civil charges against the archdiocese citing a “failure to protect children,” regarding accusations of priests abusing children under Nienstedt’s tenure. Nienstedt has denied all allegations disclosed in affidavits:

“It pains me deeply that my good name and reputation have been put into question by allegations that are entirely false and based wholly on rumor, hearsay, or innuendo.”

“I recall seeing John — and there is no doubt in my mind that it was him based on my prior interactions with him — at the Happy Tap. He appeared to wave me off as I was coming — and I backed off because I did not want impose on him.”

Another Michigan priest disclosed that Nienstedt approached his car in an area frequented by gay men in the 1980s asking him for poppers, an inhalant used to enhance sexual pleasure. A former student at Sacred Heart Seminary also disclosed Nienstedt groped his buttocks after a dinner together back in 2000-2002; Nienstedt threatened the student saying that he could, “make things unpleasant for you very quickly,” after the student protested.

Nienstedt says the accusations are “retribution” for his anti-gay views. Nienstedt claims he has evidence to debunk his accusers claims, but says that revealing said evidence is “a disservice to the people who cooperated with the investigation under a promise of confidentiality.” However, Ramsey County’s investigation in its criminal prosecution of Nienstedt is still active with a court hearing scheduled for Aug. 25.