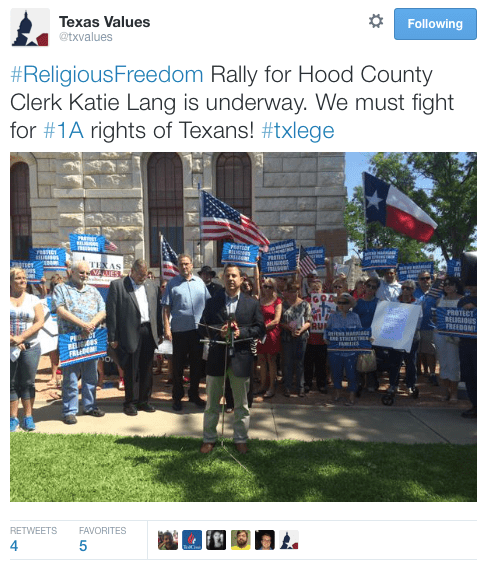 Earlier this week, we told you how Katie Lang, the clerk of Hood County, Texas, said she would finally begin issuing same-sex marriage licenses after previously attempting to claim a religious exemption. 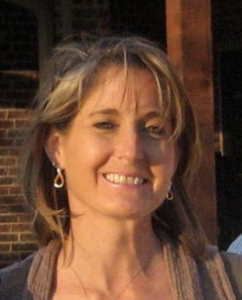 As it turns out, Lang (right) still has not done so, and she says it may take weeks before the county can update the necessary forms.

On Thursday, Texas Values President Jonathan Saenz (above), whose ex-wife left him for a woman, organized an anti-gay hate rally outside the Hood County Courthouse. Based on photos from the rally, attendance was rather underwhelming. Meanwhile, a gay couple of 27 years who’ve been trying to obtain a marriage license in Hood County told reporters they plan to file a lawsuit next week if they don’t receive one before then.

The Star-Telegram of Fort Worth reports:

Jim Cato and Joe Stapleton just want to get married.

But the two men haven’t been able to get a license from the Hood County Clerk’s office despite asking nearly every day since last week’s Supreme Court ruling legalized their pending union. …

On one side of the courthouse, Cato and Stapleton told the crowd that their attorney is sending a letter to Lang …

On the other side of the courthouse, dozens of people gathered to show their support for Lang and for religious freedom.

Lang didn’t attend the rally, and Saenz claims it was out of concern for her safety. Saenz later issued this statement:

“On the eve of our Independence Day, the Texas and American values of religious freedom and personal liberty are just as important now and as they ever have been. We will not stand by and watch as LGBT radicals try to destroy the guarantees of the First Amendment of our Constitution and ruin the personal lives of Texans who support marriage between one man and one woman. We will not be silent. We will proudly rise up with the timeless colors of red, white and blue as our backdrop, for God and country.”

More from The Dallas Morning News:

As a result, two attorneys from Austin are on their way to Granbury at this very moment. They want just one thing: for the clerk’s office to issue a marriage license for their clients, Jim Cato and Joe Stapleton, who have been waiting to marry for 27 years. If they do not get one, says attorney Jan Soifer, she and attorney Austin Kaplan will sue the Hood County Clerk’s office first thing Monday morning.

“After [Lang] changed her tune Tuesday, my clients gave her a day and waited till this morning to get their license,” says Soifer. “They said, ‘No, no, no, it will take three weeks.’ They said, ‘We’re not ready to do it, we don’t have the forms ready.’ We sent them the link to the website with the form they are supposed to use. It’s posted. It’s available to them. We know 205 other counties in Texas have already been issuing them.”

Also this week, WFAA-TV reported that Hood County residents are attempting to get the LGBT-themed children’s books “My Princess Boy” and “This Day in June” removed from the public library in Granbury, the county seat. 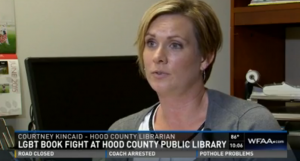 Library Director Courtney Kincaid (right) is defending the books, and the board voted to keep them, but more than 50 residents have signed “challenge forms” after a parent raised concerns and took them to City Councilwoman Rose Myers, who has since posted a longer statement about the issue on Facebook. Now, the Hood County Commission is set to consider the issue later this month.

The challenge forms are filled with comments questioning why the books are in the children’s section. Other submitters indicate the books should be banned outright because they promote “perversion” and the “gay lifestyle.”

Granbury City Council member Rose Myers said she was approached by a constituent a few weeks ago that raised concerns about the placement of the books.

She said in a statement provided to News 8:

“My decision to sign a protest regarding the book My Princess Boy was clearly based on the fact that if the library would not move the books and keep them in an appropriate location, then they should be removed […] Can a four year old understand the content of this book without the help of an adult? In my opinion, No!”